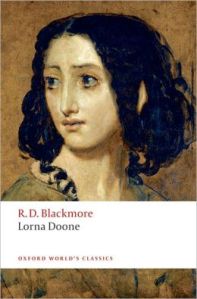 I read Lorna Doone as part of my effort to read more of the classics, and I’m glad I did. This is the late 17th century in England, a time of political and religious strife. Charles II has just reclaimed the throne after years of exile.

Told in the first person, it is the story of John Ridd, a simple farmer living in Exmoor with his mother and sisters. Nearby live the outlaw clan the Doones. The Doones had once been wealthy nobles, but had lost their title and lands due to a lawsuit, and have since taken up banditry. John is a young boy when his father is murdered by them during a highway robbery. The Doones live in a heavily guarded valley and are pretty much untouchable.

One day, while out hunting, young John meets Lorna Doone. (She was kidnapped as a little girl and raised as a Doone.) Over the years they meet in secret, and fall in love. Eventually she tells John that she is slated to marry Carver Doone, the son of the Doone leader and a pretty bad guy. The Doones will then take her inheritance. As their romance matures, John becomes determined to save Lorna from her wicked family.

The story starts off slow, but builds and becomes exciting in parts. There is love, loss, battle scenes. Lorna Doone has never been out of print, and it’s easy to see why. The writing is extremely Victorian – Blackmore suffers in some parts from excessive wordiness, and his female characters are a bit one-note. Frankly, I found Lorna herself to be somewhat of a simpering bore. But as a modern kid of girl, I can’t expect a 19th century male author to share my sensibilities!

Where Blackmore’s writing shines, though, is in his descriptions of country life. Taking into account the upheaval in England during the Industrial Revolution, the author’s love of nature and the older ways of doing things are evident on every page. (Now I want to re-read Middlemarch.) Lorna Doone is not a quick beach read, but it’s a good one! 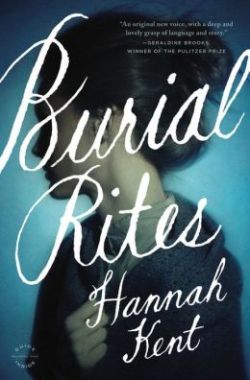 Set in 1820s Iceland, Burial Rites is a novel based on the true story of Agnes Magnusdottir. In 1829, she was executed for a double homicide, the last person to be so sentenced in that country.c

At this time, Iceland is a backwater, provincial outpost whose officials have to answer to Copenhagen. There is no prison, so Agnes is sent to a farm to wait out her sentence. It’s a lonely place, and the family with whom she is staying (understandably) distrust her. She becomes close with the young clergyman sent to prepare her soul for the afterlife, and eventually, heartbreakingly, her full story comes out. As we hear of Agnes’ life, you get the sense that in this time and place, a woman like her never had a chance and that her fate was probably inevitable.

Burial Rites is not just the story of Agnes, though. It is rich with a sense of time and place, the descriptions of the stark Icelandic landscape vivid. We witness the effect Agnes has on those around her. As we near her execution time, the sense of dread is palpable. It’s a sad but beautifully written story.

Ethan Frome. I’d heard the title and knew it was well-regarded, but beyond that I honestly didn’t know what to expect. I’m a little embarrassed to admit that I’d never read any Edith Wharton before. She wasn’t one of those authors we were forced to read in high school (HELLOOO Dickens!) Despite being a voracious reader there are quite a few classic novels that I just never got around to.

What is it about? Simply put, it’s the story of a man with no luck. Seriously, this is one sad little book. It’s also beautifully, sparingly written. The story is set in the hamlet of Starkfield, Massachusetts, and a more apt description of the place couldn’t be found. The cold landscape sets the tone for a dark tale. The prologue is told from the point of view of an newcomer to the community. He arrives in town one day and is intrigued by Frome. Despite the fact that Frome is described as ”a ruin of a man”, he has something different about him, and the narrator begins asking around. We get a few tantalizing hints about a Frome’s life: his early promise, his parents’ deaths and the struggle to save the family farm, his sick wife, and the “smash-up” that left him crippled years before.

From there, the story shifts to Frome’s point of view, back many years before. He’s still a youngish man, but nevertheless, his best years are behind him. He lives in silent misery with his wife Zeena and her cousin Mattie Silver. Zeena is sickly and mostly bedridden. Mattie is a poor relation who has come to help around the house. Zeena is dried up and mean, and we get the impression that she’s also a hypochondriac. Did I mention she’s mean? Mattie is everything Zeena isn’t: sweet, vivacious, and beautiful. Mattie stirs something in Ethan. They grow close. When the end does come, it’s devastating.

Ethan Frome is not told on a grand scale. There are no big, important ideas at work here. It’s a small book about small people and their small lives. And it’s perfect.